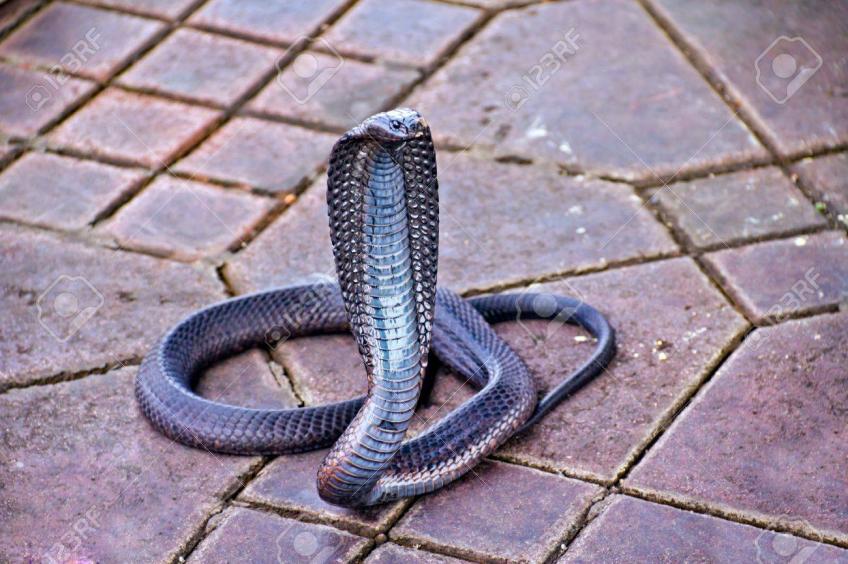 The Egyptian cobra was a revered snake in Ancient Egypt. The goddess Mertseger was in fact represented with the head of this snake. It was a symbol of royalty, and it was no coincidence that it was the kind of stylized cobra present on the headdresses of the pharaohs.

It is also, more plausibly than the asp, the famous responsible for Cleopatra's death. Ancient sources, in fact, indicate an asp, referring to a generic poisonous snake. The term aspis was then mistakenly translated with the English asp, generating a great deal of confusion.

It is not among the species considered by the IUCN, but the number of specimens is decreasing dramatically. It is a highly sought after species by snake hunters, both for its fine leather and for being sold alive to snake charmers.

Many specimens die of hunger by falling into wells and water tanks, while others are killed by cars or by ranchers. The range of the species extends through a large part of North Africa north of the Sahara and the savannas of West Africa to the south of it, up to the Congo Basin to the south and Kenya and Tanzania to the east.

In the older texts it is written that the species is also present in southern Africa and in the Arabian peninsula, but the populations present there are currently classified as different species. This species prefers arid areas with warm winters.

It adapts to live in different types of habitats ranging from steppes to savannas, from semi-desert areas to agricultural fields. It can be found in rocky areas, but also in the woods. It loves to live near water and several specimens have been seen swimming in the Mediterranean Sea.

The Egyptian cobra is a predominantly nocturnal or crepuscular snake. In the morning you can see it basking in the sun to help its thermoregulation. In some areas it was however seen in activity even during the day. The adult specimens settle in a territory where they live for years, adopting as shelter the dens of other animals, termite mounds or inlets nearby.

The Egyptian cobra actively seeks its prey. This is why it is fast, it can climb trees and sometimes it penetrates human dwellings. It is also an excellent swimmer. When he feels threatened, he tends to hope to go unnoticed or seek escape.

If the threat continues and comes within two meters, lift the front of the body vertically and extend the hood. At this point he opens his mouth wide, hoping to make the attacker give up. As a last resort, the Egyptian cobra bites.

TODAY'S MOST POPULAR
CLIMATE CRISIS
Marine microbials threatened by global warming
Atlantic fish and their resilience
THIS WEEK MOST POPULAR
ANIMALS
USA: dog abandoned at the airport by his family
Philippines: man attacked by a crocodile after trying to take a selfie
Mental health effects of pet death during childhood
The bigger owl in the world faces extinction
Marine microbials threatened by global warming
Numbers of the Siberian Tiger are growing!
India: rare black panther sighted in Bengal