The cause of the elephant slaughter in Botswana seems to have been discovered. At least 300 dead elephants were found in Botswana last May. Observers on the ground have recounted horrific scenes of dying elephants walking in circles and others dying lying on the ground.

Is the blue-green algae the cause?

Researchers have considered all possible explanations for these mass deaths, from poaching, to poisoning, to a Covid-19-type viral epidemic. After months of investigation, researchers have now discovered that the elephants have died because the water they drink from was contaminated with toxic cyanobacteria: blue-green algae.

As a result of global warming, these toxic blooms are proliferating around the world. When they reproduce excessively, the algae create a slimy layer on the surface of the water, the so-called bloom. It is a fact that temperatures in southern Africa are rising at twice the rate of the planet's average.

This means that the phenomenon is destined to repeat itself. 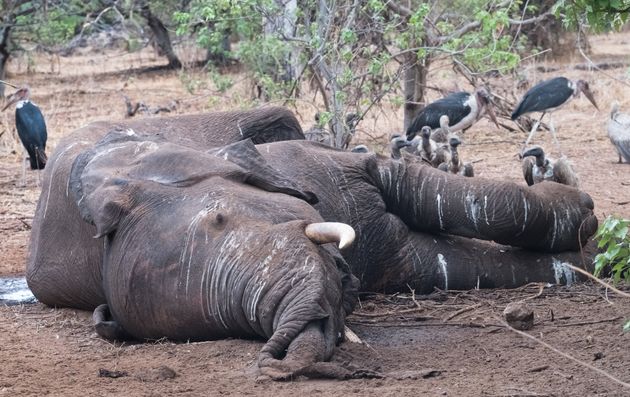 Meanwhile, some days ago we told you like for years Rhinos were subject to continuous predation by poachers in search of the precious horn, but in 2020 these animals are experiencing an unexpected and positive increase of numbers.

Thanks to the lockdown, the closure of borders and the stop to travel and the numerous restrictions linked to the pandemic, poaching acts are decreasing some populations of the five rhino species in the world seem, albeit slightly, to grow.

While the government ones were guaranteed to reserves and state parks even during the Covid crisis, for private reserves, with no income with the elimination of tourism and the consequent lack of rangers, now that are exposed and vulnerable, new possible negative scenarios open up, with poachers ready to act.

The Sumatran Rhino Rescue project is continuing its mission to save these animals in an attempt to reproduce them. In this case, the Covid-related pandemic has slowed down many of the ongoing processes, but now they are slowly recovering.

Good news, on the other hand, concerns mainly the Javan rhino, which has risen from 68 to 74. Even in India there is a struggle to continue to conserve Indian rhinos but in this case, both for the censuses and for the commitments related to animal protection, Covid-19 has temporarily blocked several projects, as India is one of the most affected countries from the virus.

However, the number of accidents linked to poaching remains very low, thanks to efficient protections by forestry officials.

To try to save all five species, experts and conservationists say, it will therefore be necessary to continue in the direction of the commitment of international treaties between governments that lead to anti-poaching measures and dismantling of the black market, to encourage monitoring and active management of wild populations, to work more with local communities and teach children the importance of biodiversity.