Japan has resumed whaling for commercial purposes starting from 1 July 2019, and once again this year, in 2021, for the third consecutive year, the hunt has reopened, after a 31-year hiatus. As an IWC member since 1988 Japan had stopped commercial whaling, although it never stopped killing whales for research purposes.

The Fisheries Agency estimates that in total hundreds of fin whales will be caught and slaughtered between now and the close of the season at the end of October. Whaling is now banned in most countries. It must be said that in Japan, Norway and Iceland it is unfortunately still practiced and every year it causes the death of thousands of cetaceans.

Two boats left from Ishinomaki, in Miyagi prefecture, joined by another two from Hachinohe, in Aomori prefecture. A fifth ship will depart from Abashiri, Hokkaido, in June. 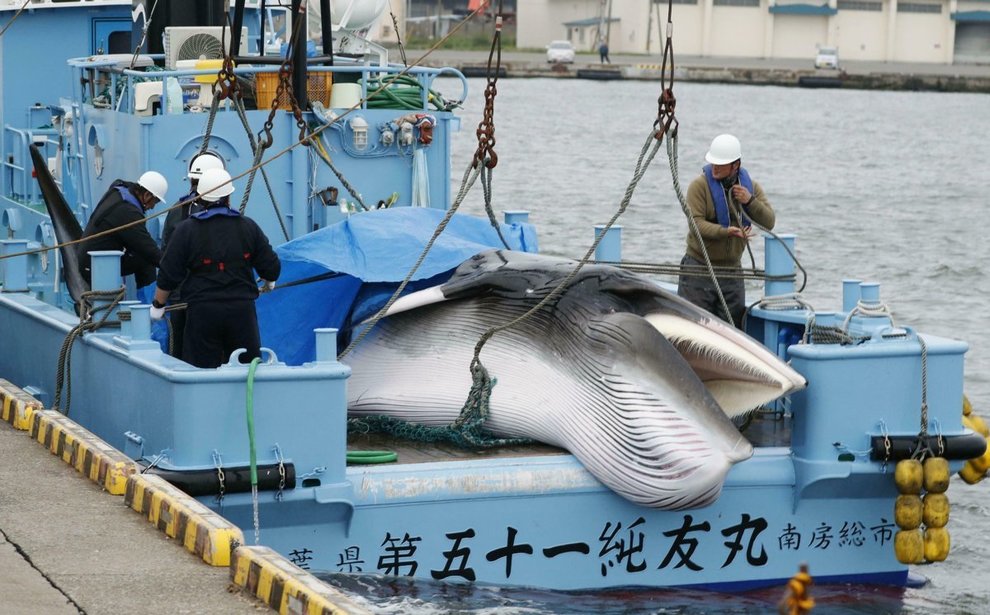 A deer has been spinning since Christmas with the lights stuck in its horns.

The photograph was taken by Mario Barito on March 21st in Veneto, and its was posted on his Instagram profile. The animal must have gotten a little too close to a decorated Christmas tree. Another hypothesis could be that the lights were thrown into the woods and attracted the animal.

Corriere delle Alpi also reports, nature will take care of untangling the lights: the deer will still be able to free itself soon from the lights as it is about to lose its horns, as every year. In March, in fact, the moulting of the stage for the older animals begins and continues until May for the younger animals.

The lights, therefore, would not represent a danger for the animal. "A deer with lights. It happens in Cortina where for some time we have seen a beautiful 5/6 year old specimen, with an important stage where threads and threads of Christmas lights are wrapped.

It is not difficult to find it in the Codivilla area, where there are also other deer, then moving for lunch and dinner between two houses where it is refreshed. It is evident that he had a close encounter with a Christmas tree, perhaps with the intention of rubbing the stage on the trunk, or because attracted by the lights and Then he went away taking away the lights that got tangled in his crown.

Removing them is practically impossible, or he tried it with clearly not positive results. Now nature will take care of untangling the lights. The photos of the deer have appeared on the social pages of passionate photographers.

One of these is the work of Mario Barito, an animal expert who for years has immortalized them with his camera in the woods of the Boite Valley. "It is not difficult to see the Christmas deer," explains Barito who took numerous images of the specimen.

“He's been around with this crown for a long time. When I approached to photograph him he didn't even move: now they are used to people, in winter they stay near the houses where they find food ». Hay is better than apples (for example) which have a tendency to ferment in the stomach: And then they go away wrong, Barito jokes.

A wildlife expert is Franco De Bon, councilor at Palazzo Piloni, a life of work in the provincial police: You have to be careful when feeding wild animals. We found dead deer not from starvation but with full bellies. They have a complex metabolism and in certain periods they lack the bacterial flora suitable for what they eat ».

We must avoid giving them bread that has yeast, adds De Bon. "Winter foraging is a very serious practice, for which there are also conflicting opinions, which must be done professionally" What will happen to the deer with the lights? "Nothing serious: in this period the boxes are starting to lose and so the Christmas lights will come off too.

Maybe someone will find them again and hang them up again next year, together with a nice stag box." The stage is lost in this period: in March the oldest animals begin and the fall continues until May, when that of the younger ones falls.

If a piece remains dangling, the deer with a hoof will take it off completely. Then growth starts again. Be careful not to mention 'horns' with deer, roe deer and fallow deer. The term is valid only for chamois, ibex and mouflons, as well as for cattle.

The two structures are different in composition and growth, but only in deer the stage is lost every year at the end of winter and redone in spring. It is not the first time that a deer has become entangled in some human object or equipment.

It had happened with a goal from a football field, almost two years ago in Alverà di Cortina. A few days earlier there had been another episode, even more sensational, when a deer had slipped into a clothing store in the center of Cortina and was photographed with clothes hanging from the stage.

The photographer Barito has stories to tell, and among other things he is working on a book written with a journalist from Verona."

TODAY'S MOST POPULAR
CLIMATE CRISIS
Over 1.5 °C: the Paris threshold will be exceeded
3% of ecosystems are intact: the rest is climate crisis
THIS WEEK MOST POPULAR
ANIMALS
Bald Eagles are dying from rat poison
Japan will release contaminated water from Fukushima into the sea
Colorado River towards the total loss of water
Pets and Therapy Animals in the Hospital
Dog-assisted in care homes: what you need to know
Himalayan forests burned by wildfires
Microplastics in the air have contaminated the entire US