Bolivia has decreed a state of national calamity due to the wildfires that have affected five out of nine departments in the country for weeks, including in the Amazian Rainforest area. In the wildfires of recent weeks, according to the newspaper La Razon, more than one million hectares of the country's forests have burned.

In the next ten or 15 days, no rain is expected in the most affected areas and it is therefore feared that the situation could degenerate further.

Bolivia declares a state of emergency

According to the local press, measures allows the government to more easily request international aid to manage the crisis.

The executive's decision came at the end of an emergency meeting organized to discuss the situation, particularly critical in the departments of Santa Cruz, in the center of the country, and Tarija, in the south. According to the local NGO Fundacion Amigos de la Naturaleza wildfires in Bolivia have destroyed over two million hectares of land from January to today: an area greater than the whole of El Salvador.

Also according to Fan, in 2019 over six million hectares of land had gone up in smoke. 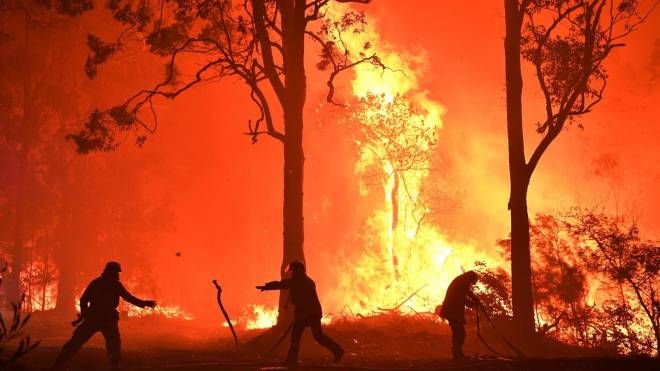 Some days ago we told you how US wildfires, which are ravaging California, Oregon and Washington State, could be the result of climate change.

The rope has also been spotted from New York, on the other side of the country, and the cloud should even reach Europe these days. A truly disturbing scenario. These fires are a clear sign of alteration. Climate change is already underway, the climate crisis has arrived.

And it can no longer be just a concern for the future. Climate change is a factor that increases the risk of forest fires. This summer’s record heat hit much of the western United States; California was the highest temperature in the world (54.4 degrees) and extreme drought conditions across the western part of the country.

Toxic and unbreathable air, fiery red skies: over 13,000 square kilometers have burned in California this year. With the temperature rising and no significant precipitation, authorities have said the fires won't stop anytime soon.

In Oregon and Washington state, fire has invaded major population centers. According to the National Interagency Fire Center, twelve fires in Oregon have destroyed nearly four thousand square kilometers. In the three states of Oregon, Washington and California, fires have burned more than 24,000 square kilometers and there are still about 59 fires not contained.

At least 35 people died. There is still hell in the forests of the Sierra Nevada and in the Cascades of Oregon and Wshington. With a certain regularity, lightning set off the fire that helped to clear fallen trees and dead vegetation.

The work of firefighters is made even more complicated by the speed with which fires are spreading. Within hours, the flames in Oregon have gained thousands of miles of land. Over three thousand square kilometers burned in the space of 72 hours.

Climate change is also one of the fields in which US President Donald Trump and Joe Biden will clash for this fall's elections - a sensitive issue that is splitting the two factions.