Drought is ravaging California, seriously endangering the food production of certain fruits and vegetables. Suffice it to say that California produces many vegetables that arrive in supermarkets all over America. Citizens are even forced to ration water.

The Californian authorities themselves had to cut off farmers' water to preserve as much of it as possible for city dwellers or wildlife. Some California hotels charge showers while restaurants have banned access to restrooms and are limiting the water provided to customers.

One of the most affected crops are almonds. About 80% of the world's almonds are produced in the US state, but with this drought, several farmers in the San Joaquin valley are unable to supply enough water to their almond orchards.

The most affected area is the fields around the city of Fresno, between Los Angeles and San Francisco. 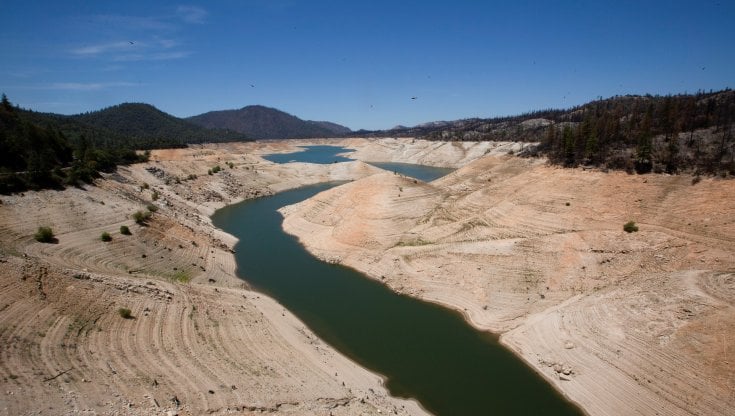 Olive tree of Roviés, on the Greek island of Euboea, has lived and resisted for over 2500, passing as a witness to hundreds of years of history, experiencing important eras, from classical Greece to the Roman Empire, from the Middle Ages to the Renaissance, to the modern age, surviving two world wars.

But not the wild fires caused by the climate crisis. In the official historiography of the millenary olive tree we can read of how the olive tree of Roviés was even described in the works of the well-known Greek philosopher and geographer Strabo, born around 60 BC.

And its gnarled trunk was so wide that it took 10 people to be able to embrace its entire circumference. When this monumental tree put its first leaves, the Greeks sank the fleet of Xerxes in Salamis and fought in Plataea against the Persian general Mardonius, while in those years Confucius died in China.

And he was about five hundred years old when Augustus founded the Roman Empire almost two thousand when the fall of Constantinople took place. Large wildfires have been going on for seven days on the island of Euboea, the second largest in Greece, located east of Athens.

In recent weeks there have been several fires that have hit Greece, and that have burned more than 56,000 hectares of land, but those on the island of Euboea have been the largest and most difficult to extinguish. Firefighters are still trying to put out the flames in the north and south of the island: in particular, the fire in the north was fueled by strong gusts of wind, which pushed it to the tourist resorts on the coasts.

Nikos Hardalias, Greek Deputy Minister for Civil Protection, said that the rescue on the island of Euboea was particularly difficult, especially because the pilots of firefighting aircraft and helicopters had to travel with limited visibility due to the large smoke produced by the flames and with strong wind.

500 firefighters are at work on the island, of which about 200 sent from Ukraine and Romania, but many inhabitants of Euboea have complained of slowness and insufficient resources in the rescue.