A truly beautiful and moving story comes from Bolivia, a country that is plagued by devastating fires these days. Two sloths, a mother and a cub, were separated during the agitated moments following the outbreak of the fire.

Mom never found her baby again, which was later found by people near the city of Trinidad. Marco Greminger, veterinarian to rescue animals at risk from fires, told on Facebook: "The heart of a mother is the most beautiful place for a child.

In the whole universe there is only one heart like this. Thanks to the call of my friend Dorian Quiroga del Río, the reunion between mother and child has taken place." 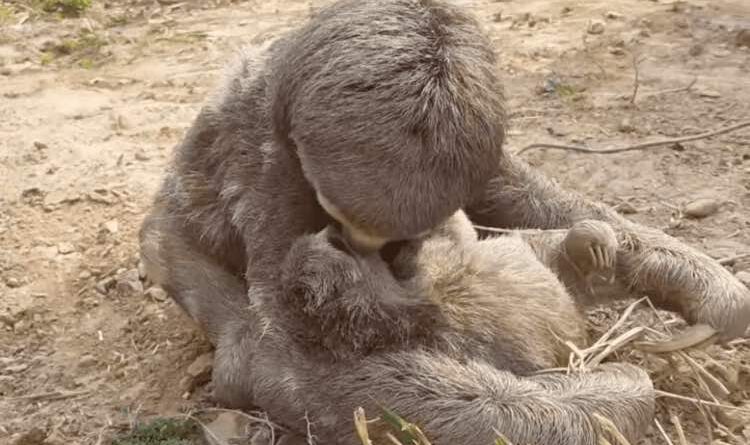 For weeks in the country fires have been devouring large portions, forcing hundreds of firefighters and volunteers to work non-stop.

Wildfires have already devastated hundreds of hectares of vegetation, mainly in the Santa Cruz department, including 4 nature reserves. Unfortunately, many animals died as a result of the disruptive fires.

For a long time it was believed that sloths lived only on Cecropia trees, but subsequent studies have shown that they live on about a hundred other plant species: this impression stemmed from the fact that Cecropia are very common in Brazil and therefore sloths there.

they are found more often than in other trees. The sloth's diet is based on fruit and vegetables and the ideal ambient temperature for it is around 22 ° C. It does not drink water, which instead takes from fruit and vegetables, the extent of the territory in which it feeds varies depending on the sloth, in the case of educational sloths it reaches up to 140 hectares, while in the three-toed sloth it reaches from 0.3 to 15 hectares.

Furthermore, the latter only feeds on some leaves and algae that grow on it. Famous for its slowness, the sloth moves at a maximum speed of around 67mm / s (0.24km / h). In the water, on the other hand, the sloth turns out to be an excellent swimmer.

Sloths are also the only mammals, other than manatees, to have a number of cervical vertebrae other than seven, ranging from six to nine.