New York invaded by smoke from wildfires of the West, especially in Oregon, which is currently the largest in the United States. The smoke produced by thousands of hectares of burning forest is moving towards the east coast, favored by strong winds.

Other parts of the eastern United States and Canada were also covered in a smoky gray haze yesterday. caused by the vast fires that are affecting the western areas of the country. In New York, according to a local expert, smoking is lower than usual.

However, this phenomenon is expected to disappear by today, with the expected arrival of a cold front in the New York region, according to a spokesperson for the US National Meteorological Service. The New York State Environmental Protection Services have issued a full-day air quality alert, a measure that is systematically triggered when concentrations of fine particles above 35 micrograms per cubic meter are expected. 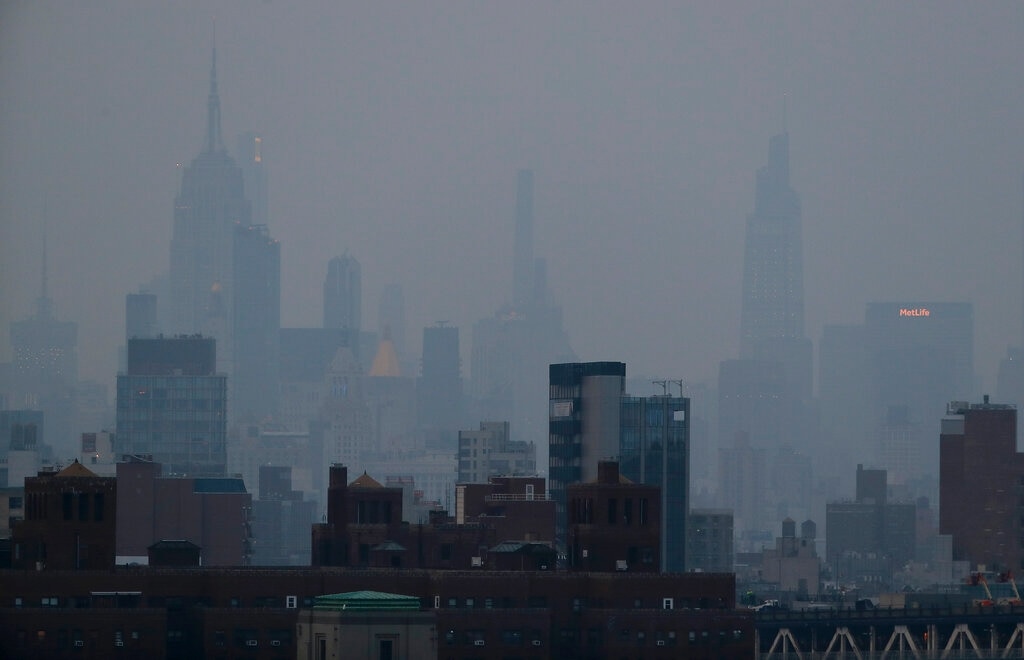 Global warming refers to an increase in the average temperatures of the Earth's surface not attributable to natural causes and found since the beginning of the twentieth century.

According to the fourth report of the Intergovernmental Panel on Climate Change (IPCC) of 2007, the average temperature of the earth's surface increased by 0.7 ± 0.2 ° C during the 20th century. Data from the historical thermal series in possession of scientists indicate that warming is not uniform across the globe: it is greater on land than in the oceans.

Furthermore, due to the greater distribution of emerged lands and relative anthropization, it is more accentuated in the northern hemisphere than in the southern one and higher in northern latitudes rather than in medium and low latitudes, the Arctic areas of Siberia and Canada are in strong warming, on the other hand the area of ​​Antarctica is cooling.

Rising temperatures are causing major ice losses and rising sea levels. Impacts on rainfall structures and intensity are also visible, resulting in changes in the location and size of subtropical deserts. The global darkening, caused by the increase in the concentration of aerosols in the atmosphere, detected between the 1960s and 1980s, blocking the sun's rays, would at least partially mitigate the effects of global warming.

A new alarm is launched by the study published in Nature communications, entitled: Global warming due to loss of large ice masses and Arctic summer sea ice. In the article we can read how "several large-scale cryosphere elements such as the Arctic summer sea ice, the mountain glaciers, the Greenland and West Antarctic Ice Sheet have changed substantially during the last century due to anthropogenic global warming.

of their possible future disintegration on global mean temperature (GMT) and climate feedbacks have not yet been comprehensively evaluated. Here, we quantify this response using an Earth system model of intermediate complexity.

While a decay of the ice sheets would occur on centennial to millennial time scales, the Arctic might become ice-free during summer within the 21st century. Our findings imply an additional incre ase of the GMT on intermediate to long time scales. "